DVUCA: Unleashing the Potential of IoT

The IoT and Industry 4.0 are no longer alien today. Right from smart factories with machines functioning autonomously to smart cities with intelligent transportation and interconnected resource management systems—IoT is everywhere. The new norm is, “Anything that can be connected will be connected.” There will be 41.6 billion connected IoT devices, or “things,” generating 79.4 zettabytes of data by 2025, as per a study by IDC. Another research from the firm points out that the worldwide spending on software and hardware around the IoT is projected to grow rapidly, from $726 billion in 2019 to $1.1 trillion in 2023. Even with so much buzz surrounding the IoT, it is still an emerging technology without a lot of standards, which makes it difficult to integrate it into existing business systems. Furthermore, there exists ambiguity when it comes to understanding IoT and the way it can be practically applied to solve organizational issues. Some of these include sustainability to reduce energy consumption, security management, and health management. Many organizations are still looking for the best possible way to leverage IoT that will help redefine how they do business by boosting operational efficiencies, enhancing performance, improving safety, and minimizing unplanned downtime. DVUCA, a leading IoT consulting services company, has picked up the baton in this IoT race to assist organizations in developing fully customized IoT solutions according to their needs. The Singapore-based company is focused on executing multifaceted and innovative concepts on problem-solving through analyzing, selecting, and implementing the right IoT solutions. “We have worked with many companies from SMEs and MNCs to government agencies to understand their needs, educate them on the latest IoT trends and developments, and provide them with products and solutions using IoT,” says Edmond Looi Director of DVUCA.

DVUCA is a spinoff of AlfaTech VestAsia Pte Ltd, which provides sustainable and cost-effective turnkey solutions and facility management services to customers. DVUCA's inception goes back to the time when Alfatech’s customers requested for IoT solutions that could turn their real estate into smart offices and buildings. The founders then laid the cornerstone for DVUCA to focus solely on IoT. “VUCA stands for volatility, uncertainty, complexity, and ambiguity. We want to be the ultimate solution provider to customers using products that provide stability, certainty, simplicity, and clarity. We want to D(e)-VUCA their problems,” says Edmond. Today, DVUCA has implemented IoT solutions in more than two million square feet of real estate across the Asia Pacific and provided IoT consulting services to multiple organizations.

IoT Applications for a Variety of Needs

We want to be the ultimate solution provider to customers using products that provide stability, certainty, simplicity, and clarity

Elaborating on the energy savings, he explains how the company has helped one of its clients having R&D, testing, and manufacturing facilities. After installing DVUCA's solution throughout their seven buildings, they were able to save 83 percent on lighting energy, which works out to about $500,000 a year. With the solution in place, 120W fluorescent light fixtures that were previously on 24/7 at full brightness were replaced by 50W LED panels that dim to 15 percent when no one is in the area. Corridors that were previously fully-lit were controlled by daylight harvesting sensors to save energy in the day and to dim the lights down to 10 percent at night when no one is walking. The sensors were also grouped together to light up and dim down the corridors in sections for safety and security.

In fact, Edmond also highlights the company's energy consumption data analytics services for another customer, showing the trends over almost 12 months of the before and after effects of implementing the IoT system in a few buildings. Not only were they able to save thousands of dollars a year, but their employees became more efficient and could be re-deployed to do more high-value work.

DVUCA's smart sensors also empower clients to carry out efficient space management by ensuring optimal utilization of a workspace, allowing managers to collect a wide range of data and study hot spots and occupancy usage visualization through their application. Edmond reiterates an instance where, after installing multi-functional IoT sensors in a warehouse rented by a customer, they found that his staff was only accessing about 50 percent of the shelves in the warehouse, and the most frequently accessed shelves were the furthest away from the cargo lift. The customer immediately relocated the high-pick shelves to be next to the cargo lift, thus cutting down the usage of forklifts, which also reduced the potential for accidents. As a result, the customer saved massively on rental cost and manpower salary.

Throwing light on IoT security, Edmond mentions how even after years of monstrous data breaches and prolific hacktivism, there is a lack of an IoT cybersecurity standard in the market. In this state of affairs, DVUCA's solutions always have two layers of data security—encryption of data at the edge and a proprietary communication protocol between devices within the system. Integration to all other systems is also done at the server level, where decryption takes place, through APIs.

DVUCA's onboarding process begins with understanding a customer's needs—what are their most pressing issues? Which are the areas that matter to them the most? Following the discussion, DVUCA gets details on the budget, which provides the boundary for solutions. Once the problems are understood and budget discussed, DVUCA’s experts put together a proposal, working with its ecosystem of partners to provide solutions that will complement the client's offerings.


This is then followed by a few rounds of iterations of the proposed solution. Finally, DVUCA creates a mock-up or proof-of-concept before full deployment. One of the unique approaches that DVUCA follows is to deploy the IoT solution in its own office, before it is offered to the customers. “We will use it, test it, and let it become part of our lives. As we use it, we get to know it more as prolonged use is our way of stress-testing the product,” says Edmond. Another advantage of this exercise is that DVUCA can subsequently use its office as the demo site for the technologies it proposes to customers.

The Power of Integrity

With integrity as its core value, DVUCA carries out a lot of in-depth testing, verifying the capabilities of the different IoT products claimed by the providers before recommending them to customers. At the same time, the company explores the interoperability of various systems to preempt any possible integration issues. The company is constantly evaluating IoT products that are the best in class. In fact, DVUCA has started developing its own unique IoT sensor, which was showcased at the 2019 IEEE 5th International Conference on Mechatronics System and Robots. The team also co-authored the technical paper for the conference entitled ‘Environment Monitoring Mesh System.’ “We have provided IoT consulting to multiple companies and organizations, so we are very aware of the needs of the industry and where the market is lacking in terms of products and features,” says Edmond.

Alongside quality solutions, what makes DVUCA a leading IoT consultancy is the team that ensures that every project is delivered with the highest possible quality. The people at DVUCA are dedicated to providing the best solutions to clients. “We are very passionate about what we do and always aim to deliver projects of the highest quality and standard. We also treat every customer, be it an SME or MNC or government agency, with the same utmost respect,” says Edmond. This is also because of our work culture that encourages employees to attend conferences, seminars, workshops, and sign-up for external training courses to upskill and reskill. For example, the company sponsored all its engineers for a 12-month-long AI for Industry (AI4I) course conducted by AI Singapore. Last year, DVUCA commenced a book club within the company to encourage its team to read more widely, a focus on non-fiction titles spanning personal development to leadership to psychology to business strategy to autobiographies.

In keeping with its spirit of integrity, the company, with its already impressive clientele consisting of Honeywell, Keysight Technologies, Abbott Laboratories, Agilent Technologies, Ichor Systems, Singapore Institute of Technology (SIT), National University of Singapore (NUS), and so on, is planning to expand into Thailand, Philippines, and Taiwan in the near future. DVUCA's current solutions focus is on buildings and is constantly evaluating IoT products in that regard. “The final goal of IoT in smart buildings is to have the various systems within the building communicating with each other, bringing about outcomes without the need for human intervention, and we are all set to achieve that,” says Edmond. 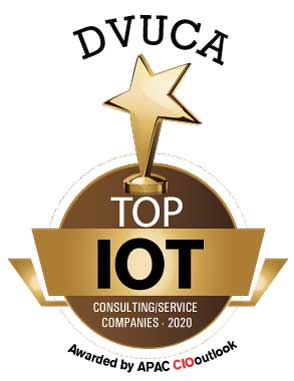 Description
DVUCA, a leading IoT consulting services company, has picked up the baton in this IoT race to assist organizations in developing fully customized IoT solutions according to their needs. The Singapore-based company is focused on executing multifaceted and innovative concepts on problem-solving through analyzing, selecting, and implementing the right IoT solutions. DVUCA offers multiple IoT applications to fulfill a client's business requirements. DVUCA's IoT solutions empower users to customize their workplace with an energy control system, including smart sensors, plug load, and HVAC controls.